Nurture by Nature : Understand Your Child's Personality Type - And Become a Better Parent

When I had my first child I kept him mostly to myself. Others would offer to hold him but I'd refuse them, not so much because I wanted my little bundle to myself, but because it just seemed that he didn't want to go to anyone else -- for others he would fuss, for me he would settle right down in grand contentment. When my twin girls came along, I more than happily passed them off to others, not only because I was exhausted and needed a break, but because they were just as likely to cry, or not, for others as much as they would for me. They clearly didn't care who held them. Even as infants my kids made clear statements about their preferences and in so doing gave a peek into their personalities.

Lamentably, when others confronted me about my child rearing habits, I didn't have any outside sources to back up my theories about the differences in my children. Now, at last, I've found something that supports my hunches. It's a book called Nurture by Nature : Understand Your Child's Personality Type - And Become a Better Parent by Paul Tieger and Barbara Barron-Tieger. The book first helps parents to try to identify their children's personality types (as well as their own) and then describes expected behaviors, attitudes and needs of children by type.

Unfortunately young children can’t take personality tests themselves, so determining your child’s type is done through observation and comparison. My son's profile fits him so well that it seems like the authors had been watching him and had written down things about him that I had thought were unique to him alone. In the same way, the profile for my personality type fit me so well that it even described specific events that had happened to me as a child (such as sitting at the dinner table for hours after the meal because I refused to eat something). For my twin daughters, however, I'm less convinced of their type and have yet to find a profile that fits them as well as the ones for my son or myself. All the same, what I have discovered about the twins so far has already helped me to better encourage and discipline them.

Each personality profile describes not only over all characteristics of a specific type, but also how that personality will be manifested at various points in the child's life from infancy through adolescence. Though I haven't found the infant characteristics very accurate (at least for my kids), the preschool and school-age descriptions have, for the most part, been right on. The authors point out possible problem areas (such as the tantrums that my son threw in preschool), reasons for the problems (difficulties with transitions), and means of avoiding or dealing with the problems that will set the child at ease rather than demanding something of them that doesn’t fit their personality needs (like taking time in advance to prepare the child for upcoming transitions rather than forcing him to deal with them without warning).

My mother's philosophy in raising my sister and myself was fairness. Whatever I got, my sister got exactly the same thing or something comparable. But my sister and I aren't alike. As children we had very different strengths, weaknesses, and needs. Nature by Nurture helps parents to identify the differences in their children and raise them more fairly not by treating them the same, but by treating them more in line with their personality types.

I'd highly recommend the book. In fact, I found several copies online for under $4 dollars (though it looks like the price has since gone up) and bought extra copies to hand out to friends and teachers. I still have to see if it'll get me through the teenage years, but I have high hopes.
Posted by barefootmeg at 3:02 PM 5 comments, Post a Comment 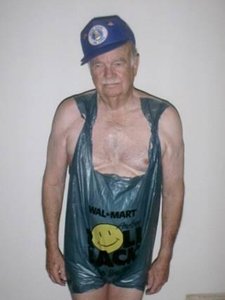 “Wal-Mart’s business was built upon a foundation of
honesty, respect, fairness and integrity.”
-- from Wal-Mart’s statement of ethics


Sam and Helen Walton opened the first Wal-Mart store in Rogers, Arkansas in 1962 (the same year that Kmart and Target got their start). Though the chain initially grew at a slower rate than its competition, in the 1980’s its growth took off. Wal-Mart Stores, Inc. opened the first SAM’s club in 1983 and the first Supercenter in 1988.

Unlike most retail chains, Wal-Mart’s identity is closely bound up with the image of its founder. Though Target and K-mart were both started by corporations (the Dayton company and the Kresge corporation respectively*), Wal-Mart was begun by a charismatic, and extremely competitive, country boy. As Sam himself admits in the forward of his book, Made in America, “my life is all wrapped up in Wal-Mart.”

Because of this, many people ascribe to Wal-Mart values that they have first attributed to Sam Walton. Sam grew up in a small town. He was a deacon at his church (before Wal-Mart took over his life). He had four kids and he enjoyed hunting. He appeared to be a Christian, all-American, family man. And if Wal-Mart was built by Sam and Sam was true to these values, then doesn’t it follow that Wal-Mart is a Christian, all-American, family oriented kind of business?

Though Wal-Mart does make a pretense of being these things when there might be a financial benefit to doing so, it’s fairly clear that Wal-Mart exists to make money. And if more money could be made from presenting a different image, I have no doubt that Wal-Mart’s image would change in a heartbeat.

“I don’t know that I was that religious, per se, but I always felt like the church was important.” -- Sam Walton, Made in America


Sam went to church and was even a deacon. He felt that it was important to raise his kids within the church and explains, “Church is an important part of society, especially in small towns. Whether it’s the contacts and associations you make or the contributions you might make toward helping other folks, it all sort of ties in together.”

It’s interesting to note, however, that whenever Sam mentions church in his autobiography, it’s in relationship to community or values (both of which he used toward commercial ends). God doesn’t appear to be part of the picture.

The man lived, breathed, and ate retailing. In fact, he was so thoroughly invested in his retailing obsession that even family took second place. On vacations, it was a given that if they drove past a retail store (any retail store) they were going to have to stop so that dad could go in and investigate. Sam was constantly checking out the competition, searching out what they were doing right, and then adding that new found idea to his repertoire. And when Sam found an employee working for his competition that he thought was particularly competent, he’d offer them a job in his own store.

The man would work until 10 pm on a saturday night (this after getting to the office at 3 am to prepare for the Saturday morning management meeting) and then get up Sunday morning and go back to work. (I assume he'd leave work just in time to show up for the church service?)

Though Sam Walton might have claimed to be a Christian, the true driving spirit within him was Free Enterprise. While wistfully considering possible futures for his grandchildren he lists: 1) finding a cure for cancer, 2) bringing culture and education to the underprivileged and 3) becoming missionaries for free enterprise to 3rd world countries. And near the end of his autobiography, as he looks back contemplatively on his life, he says, “ I am absolutely convinced that the only way we can improve one another’s quality of life, ... is through what we call free enterprise -- practiced correctly and morally.”

Spiritually the man was bowing at the alter of retail, but before his employees and the public eye, he gave God and country lip service. Bob Ortega writes in his book, In Sam We Trust, “Once the satellite system was up and running, the annual meetings were broadcast to all the stores.... Every year, the production got more involved, the meeting longer, the flag-waving more intense. In 1989, the meeting began with videos of patriotic scenes played on three giant screens as 7,000 people recited the pledge of alledgiance; then, as the lights came up, a prayer followed, led by Walton at the edge of the stage, down on one knee, head bowed, and Wal-Mart baseball cap in hand.”

Perhaps Sam’s sense of spirituality can best be described in what has become known as “the Sam Pledge” (written by Sam Walton and described by him in his autobiography), "From this day forward, every customer that comes within 10 feet of me, regardless of what I'm doing, in this house, I'm going to look him in the eye, I'm going to smile, I'm going to greet him with a -Good morning,' or a Good afternoon,' or a What can I do for you?' - so help me Sam!" Sam saw himself as the god of Free Enterprise in America.

“When Sam Walton founded Wal-Mart Stores, he established
the ‘Three Basic Beliefs’ to which we remain firmly committed:
* Respect for the Individual
* Service to our Customers
* Strive for Excellence
The Three Basic Beliefs go hand in hand with the integrity and
ethical conduct that is the foundation of our business.
-- from Wal-Mart’s statement of ethics


Wal-Mart claims to have respect for the individual, but I’m not sure which individual they’re referring to. They certainly couldn’t be referring to their employees. “Wal-Mart faces lawsuits in 30 states for allegedly forcing hourly employees to work overtime with no pay,” according to a Washington Times article. Wal-mart has fought against the unionizing of it’s employees several times, even to the point of shutting a store in Quebec down rather than have to deal with the union. And a UC Berkeley (pdf) study has determined that Wal-Mart’s employee practices cost the state of California as much as $86 million annually in health related and other assistance costs.

At the same time, the individual that Wal-Mart claims to have respect for couldn’t be those who are manufacturing the products they sell, either.

*George Dayton opened Goodfellows in 1902. In 1903 the corporate name changed to the Dayton Dry Goods Company, and in 1910 the name changed again to simply, the Dayton Company. In 1962, The Dayton Company opened the first Target ("a new idea in discount stores"). Kmart evolved out of Kresge's, which was started in 1899 by Sebastian Spering Kresge. The Kresge corporation opened the first Kmart discount department store in 1962.