We took in Daisy about three weeks ago. She's a charming little girl, about 10 months old, who can run fast as lightning, catches and kills mice, loves to sleep at your feet, and is afraid of noises in the dark. 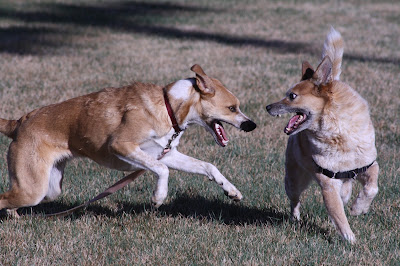 Every morning I take the dogs out for an hour long walk. When I get a chance, I drop their leashes and let them run. Daisy loves to run in huge looping circles around us. Laika used to do the same when she was younger, but now she tries to take short cuts and cut Daisy off at the pass. They love to play together when they're out in a big field. Laika's not so interested in playing when she's at home, though. Daisy can be a bit too much spunk and spontaneity for Laika who is 12 years old. 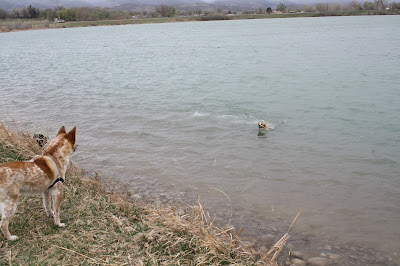 Come on in! The water's fine.
I discovered yesterday that Daisy is a big fan of splashing about in the water. We went walking along the storage ponds behind the kids' school yesterday and Daisy was eyeing the water, but I pointed out that it was cold out and she'd freeze her little tuckus off. She agreed in the beginning, but then the pull of the water was just too great. She had a wonderful time splashing about in the waves. The third time she went into the water she finally convinced Laika to join her. Laika only went in up to her chest. As you can imagine, both dogs slept well after our little excursion.
Posted by barefootmeg at 12:26 PM 4 comments, Post a Comment