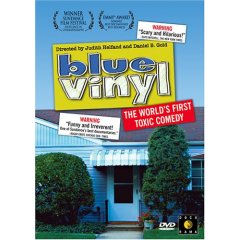 A few years back we somehow managed to get on the phone lists of several local window companies who wanted to give us a great deal on new vinyl windows. I hate telemarketers, especially telemarketers who want to sell me something I don't need and didn't ask for. But, being little Meg, meek and mild (stop laughing, Rob), I often listen to a telemarketers schpiel before politely declining. The vinyl window people put me over the edge, though. Not only hadn't I asked for them to call me, but when I politely said no, they started getting pushing. So that's when I pushed back. I would rant and rave about how bad PVC (Poly Vinyl Chloride) is for the environment. I'd blather on about how it's the worst form of plastic in the world today and that there's no way I'd put it on my house.

But the truth of the matter was that I really didn't know squat about PVC. I'd heard that it was a big baddy, but I didn't know why. So when I saw the documentary blue vinyl at the library, I jumped at the chance to find out more. (We're also going to have to order windows soon, so I figured this would help me decide just how much I really want to go through the drama of avoiding vinyl. Based on what the telemarketers said, vinyl appears to be fairly ubiquitous in new windows.)

Blue vinyl is the story of Judith Helfand and her parent's house. When the wood siding on the house started to rot, they decided to replace it with vinyl siding. Judith, a victim of DES related cancer whose ordeal led her to become hyper sensitive to the issue of toxins and their interaction with humanity, decided to do a little research on vinyl. The documentary covers about 5 years of research and explores not only the problems with PVC (including the number of PVC plant workers that have died from exposure to the product, but also the cover-ups by both European and American companies regarding the dangers), but also the search to find an alternative house siding that would be both affordable, and meet with Judith's mother's approval.

I felt like the documentary was very well done. As a viewer, I felt that I was being drawn into an exploration that wasn't already pre-determined. Though Judith started out with obvious concern about the product, she also started with ignorance as to the dangers, and she walks the viewer through her own thought process as well as through the information that she discovers in a clear and orderly way that helps the viewer feel like a partner in discovery rather than a voyeur in anger (a feeling Michael Moore's "documentaries" always leave me with). In the end, Judith's parents, who were very clear in the beginning that they thought she was being rather foolish to be concerned about the vinyl, decided to take the siding off their house and replace it with something less toxic.

I would definitely recommend this movie. It has it's funny moments, as well as it's tragically sad points. I feel like I have a much better sense of the problems with PVC after watching blue vinyl, and I have a renewed plan to research all-wood windows to install in our house.
Posted by barefootmeg at 8:51 PM 26 comments, Post a Comment