Now that you know where Ukraine is.... 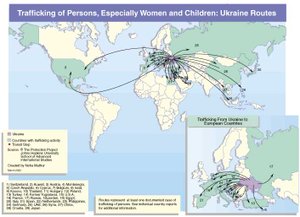 I'm half Ukrainian. For years I've told that to people when they ask what nationality I am and they've just looked at me and nodded and pretended to know what I was talking about. Then I'd explain that it's part of the Soviet Union (or was, depending upon when we're talking about) and they'd suddenly look quite on top of things and nod again saying, "Oh, Russia. Right."
But that's not at all what I wanted to write about.
Rather, I thought that perhaps I could start to compile some of the info. that I've found concerning the trafficking of Ukrainian women and the plight of orphans in Ukraine (tied together by the theme of severe poverty in Ukraine as well as in many other Eastern European countries).

About two years ago, missionaries to Ukraine came and spoke at our church, and though my dad has been to Ukraine several times, and though I identify fairly strongly with the fact that I'm of Ukrainian decent, it wasn't until I heard from these people first hand what it was like over there that I felt compelled to find a way to do something to help.

About a year ago, after reading an article by Kimberlee Acquaro in the New York Times magazine about the international sex slave trade I became not only incensed, but convinced that I should find out more, make sure others knew, and try to figure out what I could do to make a difference.
Within the past 6 months these two internal imperatives have been prompting me more and more frequently to study, to learn, and to do. So far, all I can say I've done is to tell others, and to support an orphanage organization that a friend (who has spent time getting to know several teens in a Ukrainian orphanage) recommended -- Orphans Hope. And here is some of what I've learned.


* * * * *
"More than 120 million people in Eastern Europe earn less than US$4 per day. Where old Soviet economic systems have been disrupted or discarded, there has been economic contraction and hyperinflation, which has wiped out people's savings and security. In Ukraine, over 60 percent of the unemployed are women, and of those who have lost their job since 1991, more than 80 percent are women. The average salary in Ukraine is about US$30 a month, but in many small towns, it is only half that." -- Trafficking in Women from Ukraine, by Donna M. Hughes and Tatyana Denisova (Dec. 2003) -- link to pdf file here

"Sixty five percent of cases of trafficking of women from Ukraine was carried out by organized crime networks. They traffic women because it is a high profit business with low investment. The networks are highly organized, have large-scale operations, and are connected to corrup officials. ...The size of the groups varies throughout Ukraine. The largest criminal groups in Ukraine with 20 to 30 members are in Odessa. In other regions, the groups are smaller, with five to six members. The criminal groups have territories they operate in, and are known to collaborate with officials who provide them with protection and authentic documents for travel. Organized crime groups have databases of potential victims for trafficking from sources such as applications from women for beauty contests or marriage agencies. The databases include photographs of the women, height, weight, and personality traits. Traffickers in Ukraine receive from US$800 to $2,000 per woman they deliver to pimps abroad. The value of the woman depends on her appearance and the destination country. The higher the development of the destination country, the higher the price that will be paid for her." -- "The Transnational Political Criminal Nexus of Trafficking in Women from Ukraine," Trends in Organized Crime, Vol. 6, No. 3-4: Spr.-Sum. 2001, Donna M. Hughes and Tatyana Denisova (link to pdf here)
"Can people really buy and sell women and get away with it? Sometimes I sit here and ask myself if that really happened to me, if it can really happen at all." - A Ukrainian woman who was trafficked, beaten, raped and used in the sex industry in Israel. After a police raid, she was put in prison, awaiting deportation.

"Tragic statistics show that within two years of leaving the orphanage at age fifteen or sixteen, 60% of orphan girls turn to prostitution, 70% of boys fall into crime, and over 10% take their own lives." -- taken from Orphans' Hope literature