Made in America: My Story 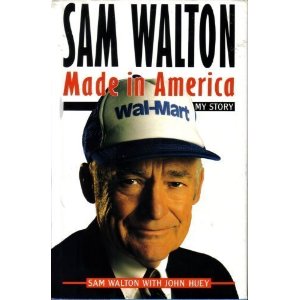 Made in America: My Story is an autobiography of Sam Walton as well as the story of Wal-Mart. As Sam himself admits in his foreword, "I'm really the best person to tell the Wal-Mart tale, and ... --like it or not--my life is all wrapped up in Wal-Mart...."


Sam Walton and Wal-Mart
Sam was a consummate competitor. He loved the challenge of the fight. As Charlie Baum (an early Wal-Mart partner) said of him, "What motivates the man is the desire to absolutely be on top of the heap." He was voted Most Versatile Boy in speech club in high school. He was a guard on the basketball team his senior year when the team went undefeated and won the state championship. He was also the quarterback on the football team that also went undefeated and won the state championship. In college he was elected president of the senior men's honor society, he was an officer in his fraternity (Beta Theta Pi) and he was president of the senior class. He was also the captain and president of Scabbard and Blade (a part of ROTC). The list goes on, but I think you get the picture. There is nothing that Sam Walton set his mind to that he didn't achieve.

Though competition is what drove him, it was Sam's ability to take other people's ideas and refine them (or mix and match them) that really gave Wal-Mart a cutting edge. Sam wasn't afraid to try new things. If they failed, he backed out quick. If they worked, he continued to improve them even more. Some of the ideas that he lifted from others and which propelled Wal-Mart wildly forward were:

Discounting: a growing trend among stores in the 60's, Sam reduced the store markup in order to sell more product, what Sam called, "blowing an item out the door." (Target, Kmart and Woolco also started with this same idea in mind.)
Building a corporate culture: inspired by the Japanese, Sam introduced meetings that included a Wal-Mart cheer as well as crazy antics by management.
Profit-sharing: inspired by a sign in England, Sam started calling his employees "associates" and he gave them the ability to share Wal-Mart's profit either by receiving a cash pay out or stock when they left the company.

Sam was also a real people person. He was able to run people through the ringer and they came out singing his praises on the other end. Bill Fields, one of Wal-Mart's early managers who later became the Executive Vice President of Merchandising and Sales, described his first two weeks on the job, "I had been with the company about five days, and we were opening a store in Idabel, Oklahoma. We had thirteen days to open it, which is still a record. They worked me about 125 hours or more the first week. The second week it was getting worse."

When Sam went on buying trips with his purchasers, he'd make as many of them stay in a hotel room as possible. Once he even had 8 grown men share a room together. Keeping expenses down was a critical component to his competitive retailing vision and he was just as hard on himself as he was on his employees. (He was one of those 8 men that shared the hotel room.)
Sam's heart was so thoroughly invested in his retailing obsession that even family took second place. On vacations, it was a given that if they drove past a retail store (any retail store) they were going to have to stop so that dad could go in and investigate. Sam was constantly checking out the competition, searching out what they were doing right, and then adding that new found idea to his repertoire. In fact, when Sam found an employee working for his competition that he thought was particularly competent, he'd offer them a job in his own store.

Though Sam Walton went to church (and was even a deacon at one point), the true driving spirit within him was Free Enterprise. While wistfully considering possible futures for his grandchildren he lists: 1) finding a cure for cancer, 2) bringing culture and education to the underprivileged and 3) becoming missionaries for free enterprise to 3rd world countries. And near the end of the book, as he looks back contemplatively on his life, he says, "I am absolutely convinced that the only way we can improve one another's quality of life, ... is through what we call free enterprise -- practiced correctly and morally."
Unfortunately, though Sam seemed to have the best of intentions, many have called into doubt whether his version of free enterprise is indeed correct and moral. (But that is the topic of many other books.)
All in all, I was left with the impression that Sam Walton was an incredibly dynamic guy with a great ability to motivate people and to execute ideas. I think he honestly cared about his employees even though he ran them ragged. I think that he wanted to be the best at what he did, but that he also earnestly believed that by doing his best, he would be doing something special for his community and every community that Wal-Mart went in to.


Made in America
The tone of this book is akin to sitting down and chatting with Sam at a BBQ. I wouldn't doubt that he dictated his thoughts into a tape recorder and John Huey set them to paper. The book is replete with quotes from former (and current) employees, friends, competitors and family members. They round out the story well and give additional perspectives of what took place during the formation of Wal-Mart. It definitely gives the sense that Sam Walton was at heart a country boy.

Having heard of court cases that Wal-Mart is currently, or has been recently, involved in as well as looking through the literature of Wal-Mart's detractors, it is interesting to find points at which Sam betrays himself. A statement here or admission there gives away a sense that perhaps those detractors are on to something. And yet Sam is far too confident in himself, and so transparent in his portrayal of his life, that I am sure he was completely unaware of having opened himself up in that way. And though I am personally convinced that Wal-Mart has contributed to the economic bubble that America is now precariously perched atop, it is a problem that I don't think Sam Walton ever had any inkling of. In his mind he was a hero. He achieved vast savings for billions of people, giving them an improved quality of life, and he did it by the sweat of his brow; he gave his life up for the good of many.

If you're interested in stories of brave and creative entrepreneurs, in stories of apple pie and pig calls, in stories of people who make it big through incredible toil, then you will definitely appreciate this book. But I also think that Wal-Mart detractors can find this book helpful. Wal-Mart is the only big retail chain that was started by a single man. (Target, Kmart and Woolco were all started by corporations.) It is easy to lay blame on Sam Walton that might be more rightly placed on the corporation that is Wal-Mart. Reading the book helps to see Sam as the eager but fallible man that he was. Wal-Mart may be a global giant that is threatening to change the world as we know it, but Sam Walton was just a competitive country hick who put some clever ideas together to form a retail chain that has taken the world by storm.
Posted by barefootmeg at 4:05 PM 1 comment, Post a Comment