I lost my dad today 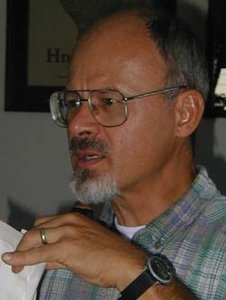 Now before you start sending your condolences, I should tell you that we found him again. He was at the Salvation Army.

Let me back up. My dad has Picks disease. It's a bit like Alzheimers (they're both forms of dementia). In the beginning my dad just started to behave differently.

He was fixated on Ukraine. (His grandparents came over to the States from Ukraine.) Everything revolved around Ukraine in his mind. If he saw a homeless man, that reminded him of the homeless men in Ukraine. If he went into a post office, somehow that reminded him of Ukraine. He'd dance Ukrainian dances in the middle of large crowds. He speak Ukrainian (or, more often, a blend of Ukrainian and Russian, to people who had no clue what he was saying.

After getting him diagnosed, my parents moved to Colorado to be near my sis. Then we joined them so that we could help out as well. Physically, dad's pretty much fine. If you were to meet him, you'd think he was a healthy gent who had a few decades left in him. But once you start talking to him, it's suddenly quite clear that no one is home.

Dad has always had a good sense of direction. Even with the disease, he has been able to take my dog out for walks to the park and back without incident. Lately, the walks have been taking longer as he takes detours to search for coins in parking lots (his latest fixation). Sometimes a one hour walk stretches out to two or two and a half hours. But he has a good sense of direction. He always makes it back home.

Today I sent dad out at 9 to walk the dog. At 11 I noticed that he still wasn't back, but that wasn't incredibly worrisome. By 12 I thought that perhaps I should call his cell phone and call him home for lunch. Unfortunately, it turns out that my mom didn't get his cell phone attached to him before his ride came to get him. Dad was officially lost.

After driving around for an hour, Mom finally got a call from the Salvation Army. Apparently dad had shown up at their door saying that Mom was inside shopping and he was waiting for her. He waited a couple of hours before they finally figured out that he wasn't all there. They managed to procure a phone number from him and got ahold of my mom who then called me to the rescue.

When I picked him up, 5 hours after he had first left my house on his walk, the first thing he asked me was, "Meg, can I take your dog on a walk?" !!!