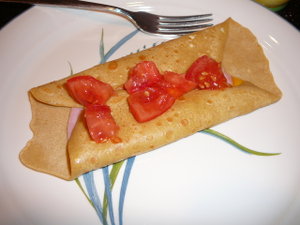 Description:
Ti Couz, in San Francisco, makes the best Brittany Crepes I've ever had. I was thrilled when La Creperie of Fort Collins opened up. But as much as I'm pleased that Brittany crepes are now available locally, I still miss the way they're made at Ti Couz (with yummy sauces).

This past Saturday the girls had a friend over for the night and for breakfast I decided to make them sweet crepes with blueberries. They came out really well and Anna has been begging for crepes again ever since. So I promised her that we'd have crepes for dinner tonight. I made a batch of sweet crepes for the kids, but decided to boldly strike out into buckwheat crepe territory for Rob and myself. It took a bit of doing to find a bag of buckwheat in the pantry (I somehow overlooked it the first time as I dug through the rice and other grains -- buckwheat isn't a grain, by the way, but that's still where I store it), but once I found it I tossed it into the grinder and made my first ever batch of buckwheat flour. (I've used buckwheat pancake mixes in the past, but I don't know that I've ever cooked with plain buckwheat flour before.)

These crepes came out well, though they weren't as buckwheaty as either Ti Couz or La Creperie. Rob really liked them, though. (He told me they were better than La Creperie's crepes, but maybe he's just trying to earn some hubbie points. "The texture was better," he claims. Ironically, I had been thinking that it was a bit too silky smooth for a proper buckwheat crepe (which is a bit scratchy to eat). I think the next time I make these crepes, I might see what happens if I use all buckwheat flour and no wheat flour.

For Rob, I tucked some cheddar cheese and sliced ham inside as filling. For myself I diced up a tomato that was going bad on the counter and added some cheese to that. ... As you can tell, my fillings are still somewhat lacking. And I didn't plan enough ahead to have yummy sauces to top off the crepes. So fillings and sauces will have to be my next point of focus now that I've got a respectable crepe to wrap it all up in.

Directions:
Combine all of the ingredients until smooth. (The Joy of Cooking suggests using a blender to thoroughly blend up the batter.) Let the batter sit for one hour.

Batter can be refrigerated up to one day.

Pour about 1/4 to 1/2 cup of batter onto a buttered skillet. Flip when the first side is lightly browned. Cook until the second side is a light brown color. Serve with a savory filling.