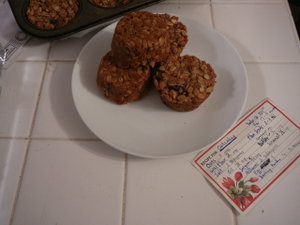 Description:
When we first moved from San Francisco to Fort Collins, there were many foods that we missed -- freshly made tortillas, papusas, thai fish cakes (ok, so i was the only one that missed those), and oat cakes.

My search for tortillas and oat cakes particularly brought puzzled looks from people. Believe it or not, the only corn tortillas some of the supermarkets here had back in 2001, were the fried, taco shaped kinds. Now most supermarkets carry soft tortillas, but they're so full of preservatives that you're lucky if you can taste any corn. But at least when I asked for a tortilla, people in general seemed to know what I was getting at -- a flat thing made of corn.

When I'd ask about oat cakes on the other hand, people hadn't a clue. "You mean oatmeal cake?" they'd ask? "No, little round puck shaped things made with oats." "Oooooh." And that was that. They obviously thought I was a nutcase for even thinking such a thing existed and that anyone would want to eat one if they did.

So finally Rob, in exasperation, decided there's got to be a recipe out there somewhere so we could learn to make our own oatcakes. He did find a few online and modified them until he finally settled on the following recipe.

(In the meantime, I've finally seen oatcakes for sale in Fort Collins. They're over-packaged and marketed as heart-healthy food (instead of just being marketed as plain old yummy oat cakes). I haven't tried one yet, but that's largely because Rob's oat cakes are so good, I don't feel the need to even try the others now.)

Directions:
Mix everything together and pack into muffin tins. (We don't use any cups of any kind and we don't grease the tins either.) Cook for 22 minutes at 325 degrees. Let cool before removing from tin. Eat within a week or store in the fridge to preserve freshness.