Description:
I've made these three times this week (I'm trying to get rid of some applesauce.) and I don't have any left to take a picture of. But they look like plain old muffins, so I feel comfortable letting you use your imagination.

This recipe is taken from a book entitled Quick Breads, Soups & Stews, by Mary Gubser, which I found at the library. It has some wonderful muffin recipes in it.

Directions:
Grease a muffin tin and preheat the oven to 350 F. (The cookbook says 400 F, but my muffins come out fine when cooked at 350 and I tend to set it there out of habit.)

In a mixing bowl, combine the flour, baking powder, cinnamon, nutmeg, salt and brown sugar. Stir until well blended. In a separate bowl mix the eggs, milk, butter and applesauce. Make a well in the dry ingredients and stir in the applesauce mixture with quick strokes just until well moistened. Fold in the nuts. Spoon the batter into the muffin cups, filling them three fourths full. Bake 20 to 25 minutes.

I've tossed a bunch of chocolate chips in these once and they tasted great that way as well. 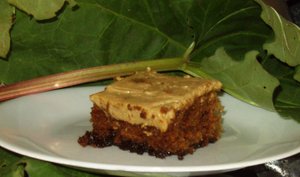 Description:
This is straight out of our "Joy of Cooking" cookbook. It's one of Rob's favorite cakes. I'm making it today for the potluck that will be following the girl's play. (A friend of mine organized several girls into a play that they wrote and directed themselves.)

Directions:
The recipe recommends making this a day or two before serving but I rarely plan that far in advance. It tastes just fine when it's fresh.

Combine the oatmeal and hot water and let them stand for 20 minutes.

All of the rest of the ingredients should be at room temp. (I can't even plan THAT far in advance. My ingredients are rarely at room temp.) Preheat the oven to 350 F. Grease one 13 x 9 inch pan.

Whisk together the flour, soda, cinnamon, nutmeg and salt. In a separate bowl beat the butter and sugars until they're "lightened in color and texture." (Given that I'm using sucanut and dark brown sugar, that never happens for me. But I beat it about 5 minutes while I grease the pan and clean up the dishes from so far.)

Add the eggs and vanilla, the the oat mixture, then the four mixture. Scrape the batter into a pan and spread evenly. Bake until a toothpick inserted in the center comes out clean, about 30 minutes. let cool briefly in the pan on a rack.

They then recommend icing it with some broiled icing recipe that I've never tried. I usually take a brick of cream cheese, beat the loofah out of it, add about 1/4 cup sucanut, beat it some more, and spread it on top of the cake. i sometimes toss a few flower petals or pieces of fruit on top to make it look nice.

(optional) When my rhubarb is going bonkers I usually pull out a bunch, chop it up and add it to the recipe. As my mom has said, "I've never been able to add too much rhubarb." I know I've added at least 2 cups and it didn't seem any more than when I had had 1 cup. It's a great way to use up rhubarb and it adds a little tartness and juiciness to the cake.