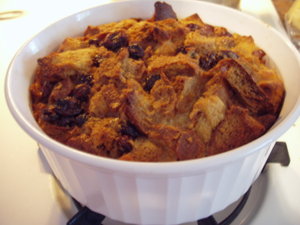 Description:
Barb recently posted her Bread and Butter Pudding recipe and we've since gone back and forth about whether this is essentially the same as bread pudding or not.

So, in an effort to finally know for myself what, exactly, the difference is, I have made both my version of bread pudding (which is really Betty Crocker's version) and Barb's version of bread and butter pudding.

When I make bread pudding, I usually use leftover bread that I've set out to harden. Today's version included half whole wheat bread rinds (We always called them "keenchicks" in our family. I've always assumed that was Ukrainian, but I don't really know.) and half cinnamon buns (which are white bread rolls with cinnamon chips in them that we get from the local bakery).

To be completely fair, I used the same ratio and types of bread in both recipes.

Bake uncovered 40 to 45 minutes or until knife inserted 1 inch from edge comes out clean. serve warm and, if desired, with cream. (which i think is a bit over the top if you ask me.)