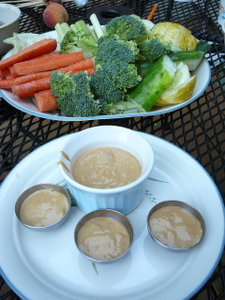 Description:
I got a hankering for some peanut dipping sauce, and thanks to the CSA I have a fridge full of veggies just waiting to be munched, so I thought I'd make some sauce and dip the veggies.

I took this to the pool where we met some friends. The sauce was definitely a hit. (I caught my friend dipping her finger in. As she then confessed to me, this is the kind of sauce that you just want to eat straight.) ;-)

Directions:
Blend the snot out of the above ingredients. [OK, so this part has been paraphrased a bit.]

The sauce may be made 2 days in advance and kept covered and chilled. Makes about 1 cup.

I didn't have lime juice, so I dumped in 1/3 cup limeade and 3 T lemon juice instead of the lime juice and water.

I recently threw my cayenne pepper out. (I had gotten a huge thing of the stuff at the warehouse where Rob used to live in SF. It was outdated then and had been nabbed by a dumpster along with several other cases of stuff. I figured that if it was outdated then, and that was 12 years ago, that it was probably time to toss the stuff.) So I substituted some ground black pepper. My friend said some sweet cayenne would have been good so I'm gonna check the co-op out and see if they have any. (I didn't know cayenne could be sweet!)

I don't like soy sauce because it's full of sugar and preservatives and non-soy crap. So I 2 T of Bragg's Liquid Aminos. We affectionately call it "The Spray" because we originally got it in a spray bottle, though now I buy the mega-sized version. The kids LOVE it.