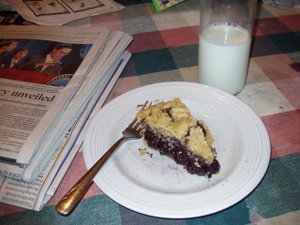 Description:
Blueberries are number one among fruits and veggies in antioxidants.

This blueberry pie is incredibly easy to make (at least, the way I make it with two serious short cuts).

This recipe is taken from Betty Crocker's 40th anniversary edition but has been modified by me.

Ingredients:
pie crust -- i buy Mother Nature's Goodies Whole Wheat Pie Shells which have no trans fats, no preservatives, and have none of that pasty white flour. i've seen other healthy premade whole wheat pie crusts in stores, these are just the ones i'm able to find locally.

1/2 c. sucanut (Betty calls for 3/4 c. of sugar)
1/2 c. freshly ground red wheat berries (Betty calls for 1/2 c. of that white pasty flour that's been sitting on the store shelves for months before you bought it)
1/2 t. cinnamon (i think this makes a nice addition and is the reason why Betty's recipes is my favorite.)
3 cans Wyman's wild blueberries (Betty calls for 6 c. fresh blueberries. But by using the canned variety, I can eat these pies all year round. yum!)
a dash of lemon juice (Betty says 1 T.)
(and Betty sticks 1 T. butter on top of the pie. i generally skip this not because i'm trying to cut out fat but because i'm lazy and would rather skip that step.)

Directions:
Mix everything together except the pie crust. Pour the mixture into the pie crust and if you want a top slap the second pie crust that came in the package on top of the first one. (Hey, like I said, I'm lazy. If you want to get fancy but still use store bought dough, you can take the pie dough from the second pan and roll it out all pretty like and then put it on top.)