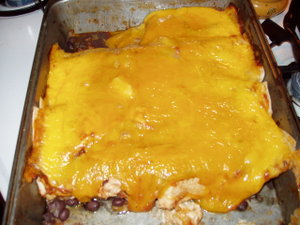 Description:
I originally got the idea for these enchiladas from the More-With-Less Cookbook, but they've probably morphed quite a bit from that by now. (I don't really know because I haven't looked back at the recipe in probably 15 years.)

Ingredients:
- 1 jar of your favorite salsa. (i usually use Frontera's Jalapeno Cilantro Salsa.)
- 1 package whole wheat flour tortillas (note: wheat flour tortillas and whole wheat flour tortillas are different entities.)
- 1 can beans (refried or whole, it doesn't matter. black or pinto also doesn't matter. i always use black (i think they're tastier.) but will use refried or whole based on what i have on hand.)
- meat is optional. i sometimes fry up chunks of chicken and toss that in for the kids' and rob's benefit.
- cilantro is optional. i love the flavor, but i don't always have any one hand.
- onions are optional.
- lots of cheddar cheese. (i like to really heap it on top so the size of your container will determine the amount of cheese you need.)

If you're going to add meat and/or onions, cook them up in advance. I don't think I've ever put beef in, but I don't see why you couldn't. If I add meat it's usually diced cubes of chicken that I've fried up in a bit of oil. When I add onion, I usually chop up one medium sized onion and fry that in a bit of oil.

To make the enchilada, hold a tortilla in one hand and slop some beans into it with the other hand. If you want to add meat, tofu, cilantro or onions (or even cheese) you can do that now. When I make these, I often just put the beans inside (because I've forgotten to fry up the onions in advance) then I throw any other extras on top of the rolled up tortillas later. Roll up the tortilla until you have a long tube and smash it into one end of your pan. (I say smash because often the ends of the tortilla are longer than the width of the pan. You don't want those ends sticking up because they'll dry out so try to mush them down in. Also make sure they get well covered with salsa and cheese later.)

Once you've filled the pan with filled and rolled tortillas, throw any other extras on top that you might have forgotten to stick inside. Then dump the rest of the salsa on top of the enchiladas and make sure to spread it everywhere. Anything not salsa covered will most likely dry out in the oven and be kinda yucky.

Next, cover the top with cheese. When I used to make these, I'd take the time to grate the cheese and pour that on top. Now I'm too lazy, so I just pull out the cheese slicer, make several slices and use that to cover the top.

Everything currently inside your enchilada pan is either pre-cooked at this point, or can be eaten without having been cooked. So your goal isn't really to cook everything up as much as to warm it through and melt the cheese. I usually put these in the oven (at 350) for about 20 or 25 minutes. Once the cheese is starting to brown I know they're ready.

You'll notice that in the picture I've dug in from two sides. The closer side has chicken, for the kids. The farther side is where my veggie version was located. :-)