The Digital Story of the Nativity

This is a real tear jerker. Here's the description from Matthew West's YouTube page:

This is the video my new Christmas song - "One Last Christmas." This song is inspired by the true story of the Locke family and their son Dax.

At just thirteen months old, little Dax was diagnosed with a rare form of Leukemia. He was given two bone marrow transplants as a part of emergency treatment; one from each of his parents. The doctors then told his parents that Dax would most likely not make it to see Christmas.

This song is about the love of a family, and the coming together of an entire community to make sure that this little boy could have one last Christmas. His dad, determined that his son would see Christmas, put up the decorations early. The neighborhood caught on, and did the same. The whole town soon followed suit. A website was built telling his story. Soon, pictures were sent from all over the world of Christmas decorations that had been put up in his honor.

Dax did lose his battle with Leukemia, but not before he got to see one last Christmas. Today, this little boy's legacy lives on, and his parents are making sure it does. They were so touched by the care they received from St. Jude's Children's Research Hospital, that they now have a desire to raise enough money to run the entire hospital for one day in honor of their son, Dax. The total cost to run St. Jude's for one day is $1.6 million dollars. Already, they have raised a quarter of a million dollars.

This Christmas, it is on my heart to join forces with the Locke family, and help them in their cause. I would like to encourage you to join us in raising money that will go to an amazing cause in St. Jude's Children's Research Hospital that cares for so many children each year.

To donate now to St. Jude's in memory of Dax please visit:
http://tiny.cc/m1mdo

To read more of Dax's story visit:
http://www.daxlocke.com/
or
http://www.matthewwest.com

Together, we can reach this goal -- and fund St. Jude's for an entire day in Dax Locke's memory! 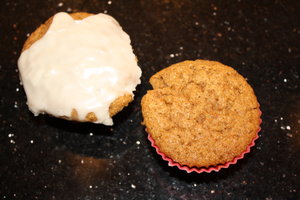 Description:
Nathan heard that the bakery down town had eggnog cupcakes and he really wanted one, but none of us were up for trekking down there to pick one up. So I just made some instead.

We're out of eggnog, so I made a mini-portion of an eggnog recipe that I found online, then mixed that into an eggnog cupcake recipe that I also found online. Since I knew I was going to be cooking the eggnog, I didn't mind that it was a raw egg version. What I've written below is my mash-up of the above recipes.

Ingredients:
Eggnog
1 oz rum
1 oz bourbon whiskey (I used Irish whiskey because that's what I had on hand.)
1 beaten egg
3 oz sugar (It should have been 1 oz. sugar, but it came out of the sugar jar faster than I was counting on.)
pinch salt
2 oz whipping cream
2 oz whole milk

Directions:
Mix together all of the ingredients for the eggnog. Set aside.

Divide the batter between the cupcake tins, filling each one 2/3 full. Bake 15 minutes for mini cupcakes or 22 for regular. A toothpick inserted into the center should come out clean.

The original cupcake recipe came with a buttercream icing recipe as well, but I didn't notice that until after I'd already done a drizzling icing of my own: powdered sugar, half and half and a splash of rum.

We suspect Nathan might be allergic to nutmeg, so we held off on that and added it individually.

With the leftover 5 yolks, I made egg custard with a dash of nutmeg on top.