I destroyed my laptop screen today (or... how dulce de leche led me down the path of destruction) 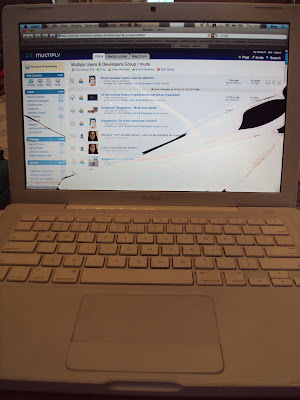 (If you look closely you might notice that some of the letters on the keys are worn off. That happened on my last laptop too. It couldn't be that I type too much, could it?)

I doubt this is visible but the plastic casing to either side of the mouse was cracking. I've wondered if that's why they switched to the solid body style of laptop. The plastic didn't hold up so well.

Last week the gals went to a dude ranch with my sister. The place is called Latigo ranch and I'll post pics soon. But that detail is relevant to this story because two 10-year olds were gone for a week and therefore weren't drinking milk here. And Nathan has had bumps on his arm for ages now and we finally decided to try cutting out (or at least cutting back on) dairy to see if that made a difference. So he's been drinking less milk.

We usually go through 6 gallons a week and sometimes I even have to run out and buy an additional gallon to see us through till the milk man arrives next. But not this week. This week we have more milk than we can shake a stick at. So I decided to shake a wooden spoon at it instead just to see what happened. I boiled the milk, added some sugar, cooked it and stirred for aaaages. (In other words, I used a gallon of milk to make about 4 or 5 cups of dulce de leche.) While stirring I read through the New York Times and the Denver Post and I still had to stir longer but had nothing left to read. So I decided to try to get some work done. I grabbed my laptop (the Macbook that I won from me.dium (now OneRiot)) and set it near me and sorta... on top of something that was sturdy at the time. So here I am stirring and entering data, stirring, stirring, entering data. You get the picture. It was all going somewhat OK until... that sturdy thing that I had set the computer on got hit by one of the breakfast dishes shifting in the sink. It didn't shift far. It really wouldn't have been a problem at all if I hadn't set a thousand dollar computer on top of it. But I did. And the computer fell. Down. to the Ground.

The screen doesn't work so well now, though the rest still seems to be functional. So I suppose if I can find a cheap screen around somewhere we can still use the thing.

Yeah, so that's what happened.

Fortunately I just backed the thing up yesterday. It had problems overheating this summer (which I found particularly odd since it never overheated last summer and last summer was quite a bit hotter than this summer) and shut itself down a few times. It's never acted quite the same since so I was already thinking of doing a laptop switch. The dulce de leche sorta spurred me on toward shifting sooner rather than later.

What am I using now? A Macbook Pro that's somewhere around 6 months older (I think) than the Macbook that did that "kiss the ground" thing. It's a cast-off that Rob bought from his work place. Thank God for start ups that do mini-layoffs and end up with a few extra computers laying around. ;-) (Hey, look at that! A silver lining to the unemployment debacle.)
Posted by barefootmeg at 9:51 PM 24 comments, Post a Comment