Dollar Coins in the U.S.A. 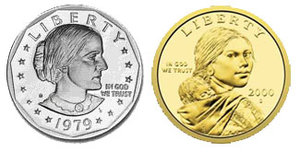 While shopping at Trader Joe's in San Francisco the cashier asked me if I had kids. Confused but thinking that I was going to be offered some stickers to take to the kids I said yes. Instead of stickers, I was offered two dollars of my change in coins rather than bills.

Dollar coins are treated not as the currency that they are, but rather as novelty items. They're a treat for children, not a coin for every day use. At least, that is what the American public seems to think on the matter.

The vending machines that sell stamps in most post offices give dollar coins as change (though they don't accept them in payment, oddly enough). You can also get dollar coins simply by going to the bank and asking for them. (Granted, you'll have to exchange some paper money for them. Rob, my husband, usually buys $80 worth of dollar coins at a time.)

Simply by using dollar coins, you can expose others to them. The more people become comfortable with dollar coins, the more they may be willing to use them.

Come on, you reticent Americans. The Canadians have not only dollar coins, but two dollar coins as well! If they can do it then we bloody well can too.