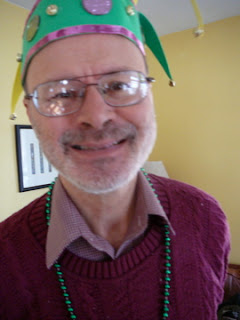 This is an excerpt from a letter I wrote today:

My dad continues to get worse.  For a long time he seemed to stay about the same.  He was more active in the summer and a bit easier to deal with in the winter, but from year to year it seemed like he was stuck at a point where he could converse and do various activities, he just couldn’t remember very well and he occasionally did embarrassing things (like comment on how fat someone was within hearing distance).  But in the past two years there’s been a sharp decline to the point where now he hardly speaks.  He can read almost anything, but spontaneous speech is pretty much limited to a few lines.  (“Let’s go out the front door,” being the one that I hear the most often.)

My mom sends him to adult day-care twice a week.  They’re really good with him and it gives her a breather.  She really should have sent him more often when he was harder to deal with, but any break, even now, helps.

He walks A LOT.  You can walk in a circle at my mom’s house through the kitchen, the dining room, and the living room then back to the kitchen.  Pretty much my dad just walks in that circle from the time he gets up to the time he goes to sleep.  A couple years ago he went through a phase where he ate everything in site (including food in front of other people and dog or cat treats that were left around).  He gained a lot of weight and went up several pant sizes.  Well now he’s lost all of that weight and is even thinner than my mom ever remembers him being.  Something about the dementia makes him agitated and he just walks and walks and walks.  If he sits down, it’s only for a few seconds and then he pops right back up again to walk around some more.

If you ask him a question, he’ll look at you for a few seconds, and then continue doing whatever he was doing before (most likely walking).  As recently as 6 or 8 months ago he was able to answer a question such as “Who am I?”  but not any more.

It’s difficult getting him to eat anything.  If cookies or candy are sitting out, he’ll grab something to eat and munch while he’s walking.  Lollipops are particularly favored, although he’ll chew the stick when the candy is gone, so you have to watch and remove the stick when he’s reached the end.  But getting him to sit down at a table and eat is very hard to do.  Often you have to hand him a plate of food and he’ll take a bite while walking.  Then he sets the plate down and you have to get it and hand it to him again on his next pass through.

But while he’s clearly getting “worse,” he’s also getting better in the sense that he’s easier to deal with.  Whereas before he’d ask questions almost non-stop, now he hardly talks and when he does it’s quieter and not insistent at all in the way that it used to be.  He’s pretty gentle and complacent (other than needing to walk like crazy).

He’ll most likely eventually lose the ability to speak at all, even to read.  Sometimes he leans when he walks, so obviously something is taking place physically, but it’s hard to tell what’s going on when he can’t tell us anything.

The plan is to try to take care of him as long as we can on our own and only put him in a nursing home when it’s too hard to care for him.

The picture is of my dad after I picked him up from daycare where they had been celebrating Mardi Gras.