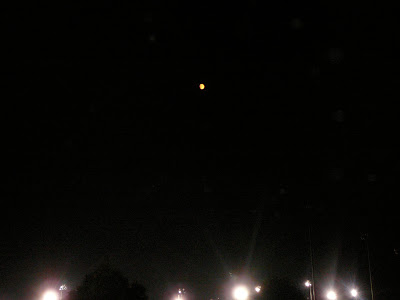 Outside the Moby Arena at CSU.

The kids and I joined several school friends and their families in going to hear Greg Mortenson ("author" of the Three Cups of Tea book). The Moby arena was packed. We had to wait an hour before they got started (We got there early because there was open seating.) and the kids got a bit antsy, but once Greg started to speak they were able to settle down and listen fairly well. Nathan's school is going to be reading the children's version of Three Cups of Tea this year. (Each grade will be reading through it at the same time.)

After the talk we walked out of the south side of the arena and saw the moon, red as can be. It was rather eery. I'm assuming it's red because of the fires in California. It was overcast/hazy yesterday and it is again today. And the sun is definitely a bit redder looking than usual.

If it's this bad here, I can only imagine what the skies in Southern Cal are like right now. (I asked Rob if it was hazy in San Francisco as well, but he said it was too foggy to tell.)
Posted by barefootmeg at 9:28 AM 17 comments, Post a Comment