We've been talking for a few years now about getting a second pooch. Our red heeler, Laika, is about 12 this year. (She's a pound puppy, so we're not entirely sure how old she is. But we've had her since 2002 (as I originally announced in this blog. That was before my Multiply days.) so she's at least 11 since she wasn't a puppy when we got her.

Naomi has wanted a corgi of some sort (meaning "a corgi mix"). We've been open to a few other working dogs though. We fostered Daisy, a heeler/whippet mix, but she was a bit too lively for most of the family. Then we tried a puppy from Petfinders that was listed as a Corgi/Heeler mix and was mostly likely a Pit Bull or Pit Bull mix. She was a real sweetheart, but since I didn't know what breed she was, I figured we really had no idea how large she would get and I wasn't up for a large or overly-protective dog. (We fostered a pit bull over the winter holiday and though she was also a snuggler, I felt like I couldn't walk near my own kids at night for fear of being snapped at.) 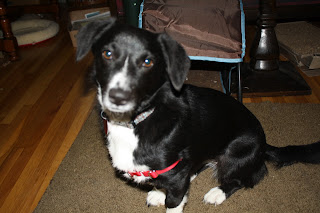 So we've been keeping our eyes an ears open for a Corgi mix. My sister found a little girl in Wyoming that looked promising. Naomi was a little worried about growing attached again, only to lose the dog. But I talked her and Anna in to going up to Wyoming with me. We visited Oreo and another Corgi/Terrier mix that nearly licked us to death. His name was, appropriately, Dash. The girls liked Oreo so we brought her home with us. We dithered about with names for several days until we finally settled on Maeby, the character in Arrested Development. The name fits our pooch really well. She's a very cautious, easily scared little gal. She huddled on a little doggie bed under our dining room table the first day we brought her home and we're still working on getting her used to going in and out of the door to the house. But she snuggles every night with Naomi and she jumps for joy when I come home after being out running errands. She plays with Bo and I even caught her playing in the back yard with Laika once, though Laika vehemently denies that anything of the sort ever happened. Even Tibbs has chased her around, though I suspect he meant it more as an aggressive move than the fun play time that Maeby took it as.

I'm thinking of fashioning a little jacket/cape for her to wear that discourages strangers from trying to pet her. That still freaks her out too much. But given that she's too afraid to go anywhere on a leash, I don't think I need to be in any hurry about that. I hope she'll become more social in time. But the reality of that happening? Well, it's probably a maybe.
Posted by barefootmeg at 3:00 PM