My First MOC as an Adult 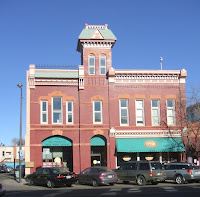 Last year, Nathan and I attended Brickcon in Seattle. I was amazed by the variety and detail in the MOCs that were on display there. (MOC means My Own Creation and refers to individually made creations as opposed to completed kits sold by Lego.) I was so inspired, in fact, that I've decided to make my own MOC to take to this year's Brickcon.

I wasn't sure what building to attempt. I had been tossing around various possibilities, all older buildings downtown, when I came across a sign for a fundraiser to help the victims of the High Park Fire this summer. They used the Old Firehouse as their attention grabbing image and it immediately struck me that the Old Firehouse would be an appropriate building to begin with. It's old (The older (left) half was started in 1881 and finished in 1882. The addition (right half) was added in 1901.), it honors the fire fighters who helped to control the High Park Fire this summer, and it would definitely be a challenge for me and something I could be proud of if I pulled it off.

I made an initial order through Bricklink and when it arrived I started building out the base of the building. I discovered two things right off the bat, I had ordered bricks that were way too big! and I needed a bigger baseplate. Scale has been a bear to get into my head, for some reason. I'll imagine a section of the building with such and such bricks, then when I get right down to putting them together I realize that I way over planned. (A 1 x 1 Lego brick is equivalent in scale to 1 foot across and 1.2 feet in height.) I immediately had to reorder skinnier bricks so that my wall wasn't the thickness of the Alamo. (Didn't the Alamo have thick walls? Or am I thinking of some other famous old building?) I've basically gone through this same routine several times, ordering a bunch of bricks thinking they'll work best for such and such part of the building only to put them together and find that they don't at all create the effect I thought they would. Needless to say, I'm learning quite a bit about Bricklink through this process. And I'm spending way more money than this project really should cost. But I keep reminding myself that I'm a beginner and I can use the leftover bricks in my next project (hopefully). I've started keeping track of which shops sent the bricks in a timely manner and without an exorbitant shipping fee and which to avoid. But sometimes you have to go with whoever has the pieces you need. 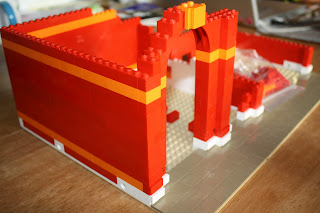 I finally got fed up with waiting to get started and I just dived right in. I think I'm going to redo what I have so far, but at least I've gotten my first arch in and started to see how what I need for the next stage up (above the arch). You can see in the photo to the left that the bottom row is white (representing the white sandstone they used as the foundation), except where it isn't. The red pieces are standing in for white pieces that I ordered ages ago that still haven't arrived (because the gal invoice me about a week to a week and a half after I made the order!). Then you'll note there's orange on the left, but not on the right. That's another total oopsie. It turns out the building was originally all the same color of orange-ish brick with some orange sandstone as decoration. But at some point someone painted some of the brick, turning it closer to red, or maroon perhaps. So this starts all sorts of debates in my head - am I aiming to make this building as it looked originally? (If so, I probably wouldn't build the eastern addition.) Or should I build it as it is today (but then will I have to add the awnings?!!). Yada yada yada. The point being that I started out doing the brick red and the painted brick red. But then I realized that the brick at the bottom matches the brick higher up, but I had planned on doing that in orange. So, to be consistent, the unpainted brick at the bottom really should be orange. Back to bricklink I go.

I think I've finally decided that I'm going to do the building (mostly) as it is today. That, however, means that now I need to fill out the bookstore and the tea shop on the inside. So I've been researching how to make bookshelves in Lego (and I've been ordering more bricks through bricklink) and since I've got most of the basic structure worked out (at least at the base) I'm starting to realize that if I'm doing this in today's style, I need to add in the windows where the fire engine used to go in and out, and I'm also trying to figure out the doorways (which have lots of extra glass around them).

My mantra to myself is that I'm just trying to create something that echoes the Old Firehouse. There's no way I can get all the details right. Part of building with Lego means working with the limitations of Lego as well. It's a steep learning curve, but Nathan is my advisor and patience is my guide.